Kurono acquired a piece of Ukiyo-e artwork – ‘Japanese Bellflower’ – a woodblock-on-paper original by Hiroshige that he drew circa 1840, which still remains in exceptional gallery condition even after 180 years. It depicts Japanese bellflowers in full bloom, drawn with a purposeful and almost vector-like manner that looks avant-garde even by today’s modern design sensibilities. At the top is a handwritten poem by Hiroshige, loosely interpreted as ‘The moon indulges into the night in various ways.’ The artwork is signed by Hiroshige and carries his emblematic seal.

Kurono decided to take this more lavish step of basing our designs on an actual artwork acquisition due to authenticity and uniqueness. In the introduction of artwork onto products, most other Japanese companies might base designs on traditional royalty-free or small-fee designs. But we found that the same traditional Ukiyo-e designs were too ubiquitous – waves, cranes, flowers, fishes – designs that you would have already seen on our complimentary furoshiki cloths that Kurono watches are wrapped in.

By basing our products on an actual piece of historical art that Kurono owns, we extend to our customers a sense of history rooted in authenticity and uniqueness. 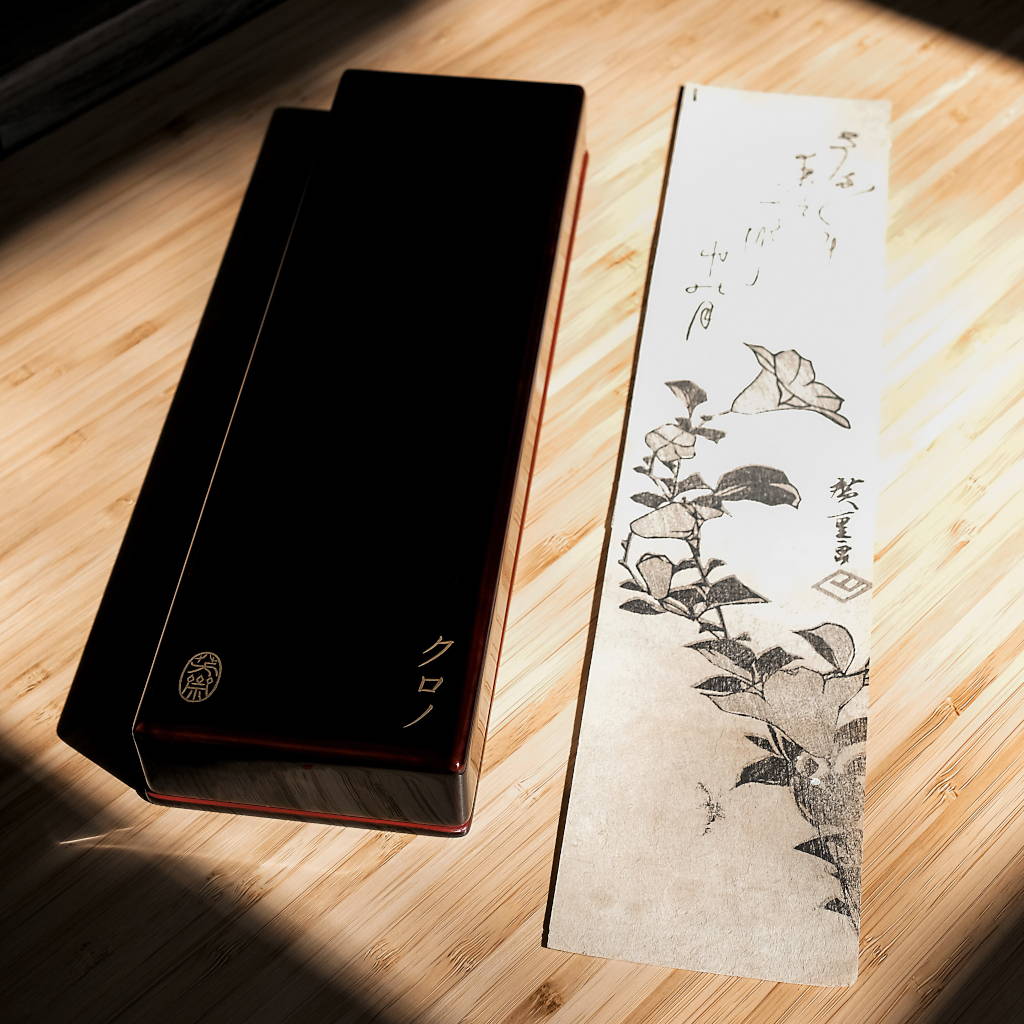 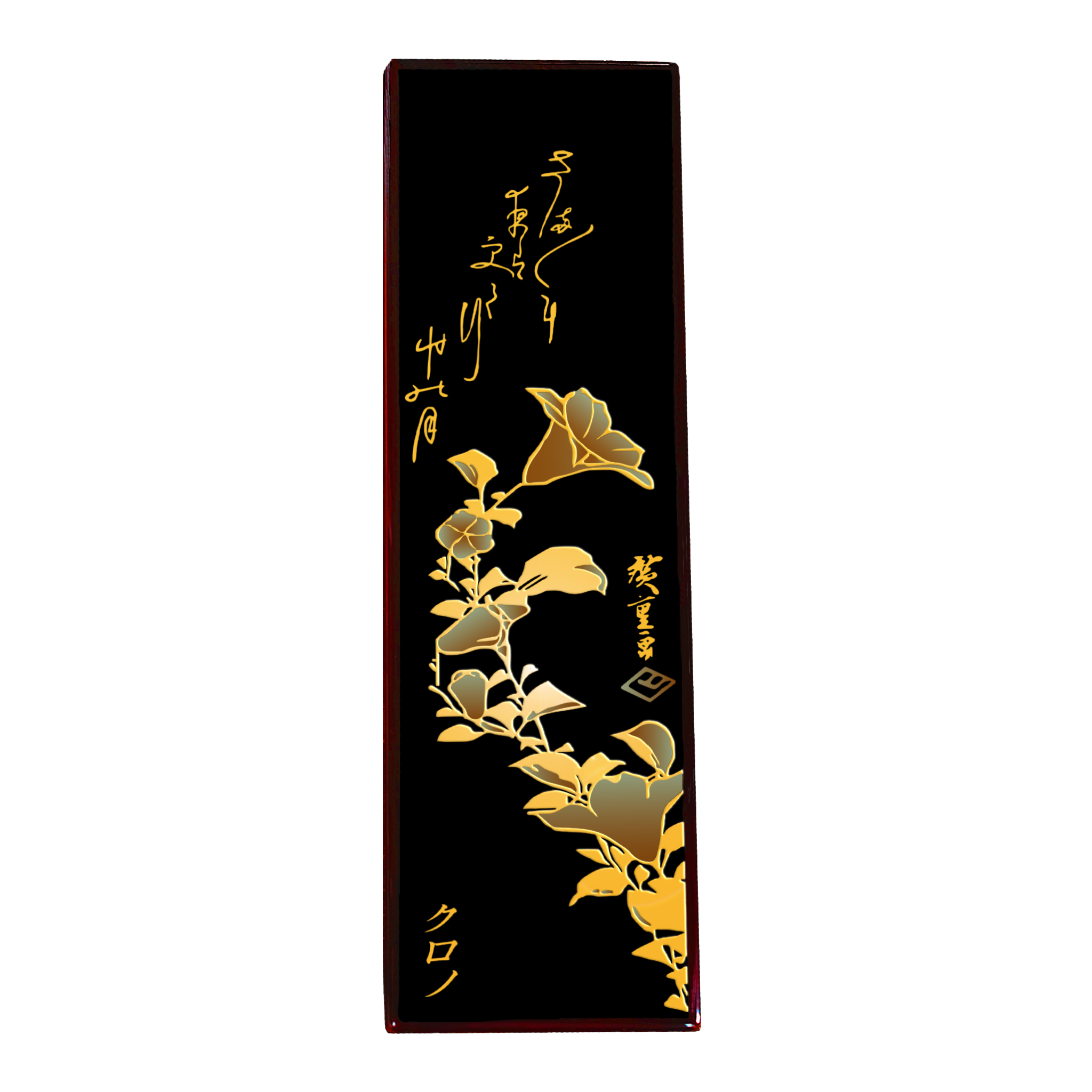 Introducing the first product of our new Kurono x Hiroshige line, the 'Tamenuri Maki-e' box - Bringing together what we think are the best in traditional Japanese art and handcraft into a single product:

- Maki-e of an original ukiyo-e artwork by Hiroshige

The box is first constructed in wood, made to kuro-tamenuri urushi standards and then left for limited curing. A further process of maki-e is then applied to the box with the ukiyo-e ‘Japanese Bellflower’ design and script by Hiroshige. An additional layer of urushi is applied, before being left for full curing. 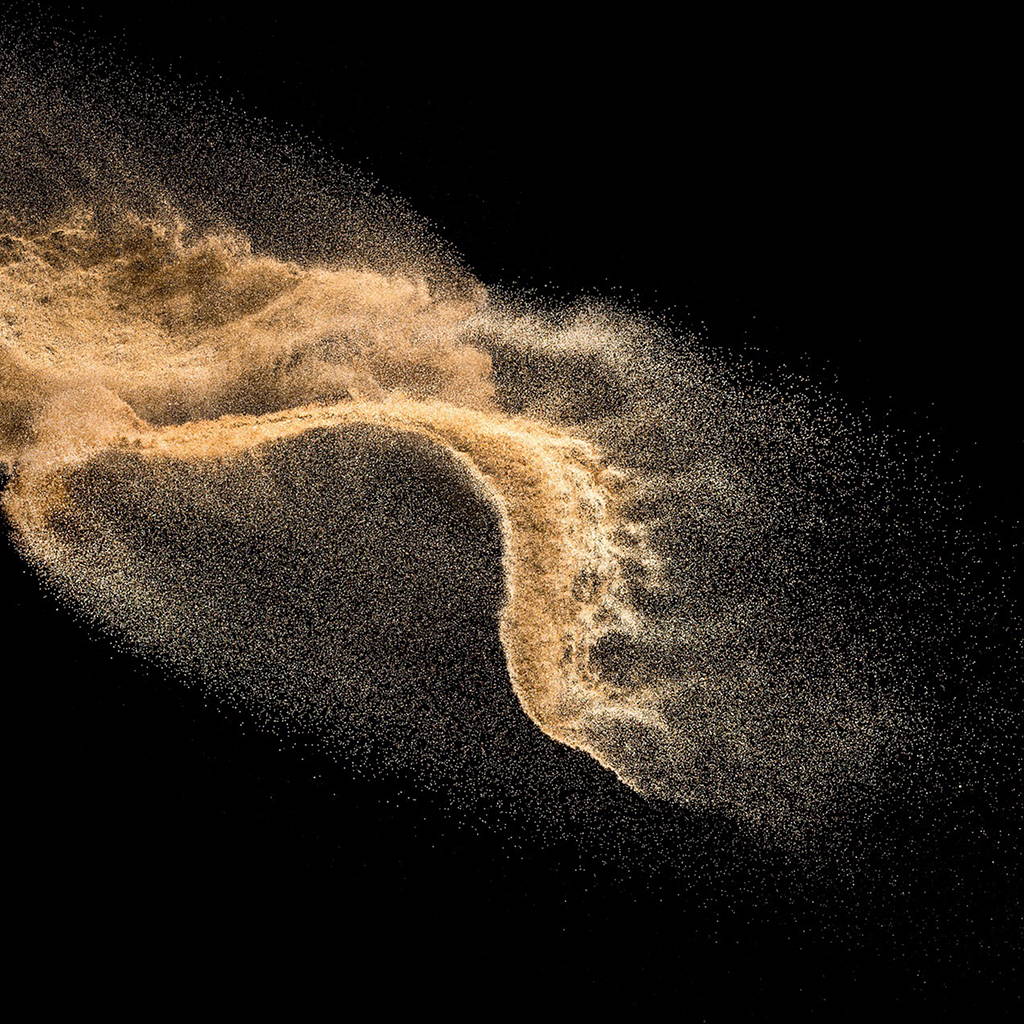 Maki-e (蒔絵) - literally meaning sprinkled picture - is an art technique unique to Japan. It is a form of Japanese lacquer painting where the design is sprinkled with gold or silver powder and has, for the longest time, been held in high recognition and renowned for its exquisite beauty and artistry. The production of maki-e requires multiple processes, starting from lacquering, drawing, sprinkling and finally, polishing.

Originating in the Heian period (794-1185), maki-e objects were cherished by the highest of social classes - Court nobles, royal families and military leaders incorporated maki-e objects into their daily lives as a symbol of power. There was an element of hidden elegance with maki-e, it was neither flashy nor blatant, yet held a compelling aura of grandeur to them. Minuscule details were elaborate and immaculately executed, emphasizing its classiness and sophistication, thus its appreciation by only the most prestigious. Maki-e can be regarded as the epitome of complexity, in simplicity. The oldest Maki-e in existence now is the ornamentation on the sheath of the Kara-tachi sword treasured by Emperor Shomu (701AD – 756AD).

The technique used on the Kurono box is ‘kaga maki-e’ – which is similar to that used by Kokusai on Namiki’s Nippon Art fountain pen series. By balancing hand silk-screening and hand-painting, the maki-e art is achieved much faster than being fully hand-painted, and significantly reduces the price. The average price for a full maki-e fountain pen is about JPY1,000,000.

Urushi, to many especially collectors, is seen as a miraculous substance. Urushi cures naturally through a process of oxidation and polymerization into a material with remarkable properties for a natural substance.

As the urushi lacquer hardens, it absorbs moisture from the air. This makes the lacquered surface perpetually shiny and slick. It also makes it very durable and able to withstand erosion from water, acids, alkalies, alcohol, and changes in temperature, which is the main reason lacquer became an art form to begin with. Over time, urushi will actually become harder and more scratch resistant as the polymerization process continues on even after the initial manufacture.

Of particular renown in Urushi handicraft is the city of Kanazawa in Ishikawa Prefecture, the former Kaga Domain. Maeda Toshitsune, the third feudal lord of the Kaga Domain who lived through the final phase of the turbulent Sengoku period and into the Edo era, summoned renowned craftsmen of all trades from across Japan to the region’s Osaikusho workshops. It is said that the techniques employed by the famed Urushi craftsmen brought to Kaga Domain in this way are the origin of today’s Kanazawa lacquerware. Kanazawa continues to give rise to numerous master craftsmen, boasting a unique tradition of Urushi handicraft incorporating samurai culture. 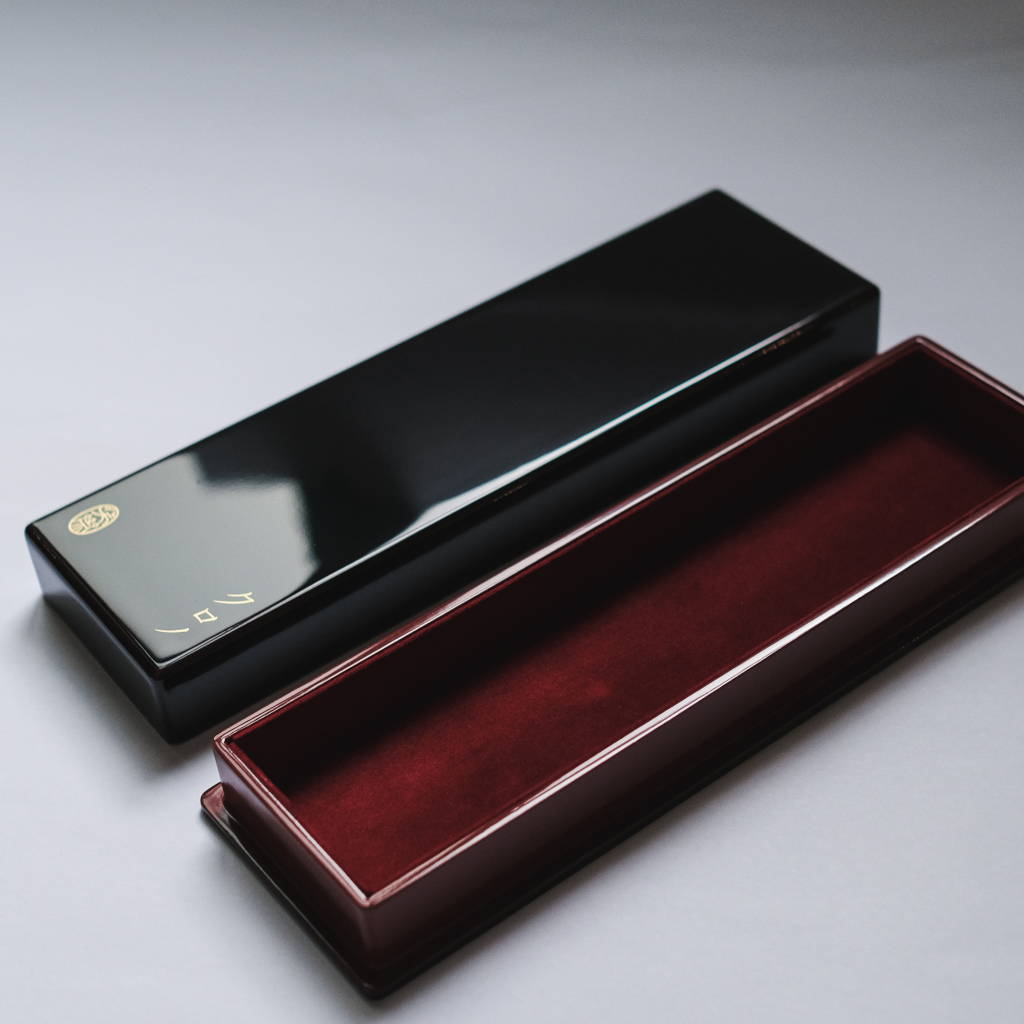 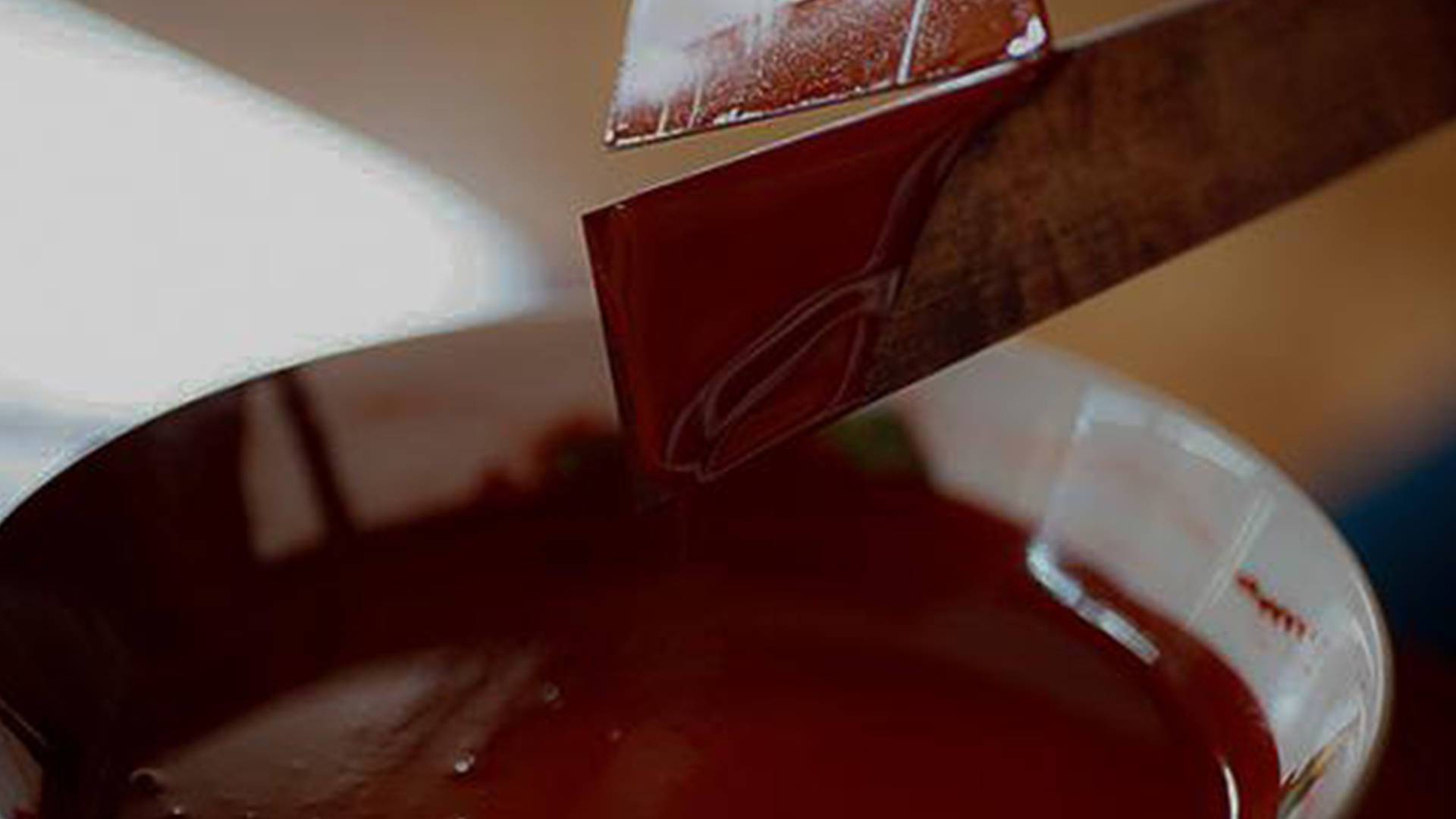 HOW IS URUSHI HARVESTED

Urushi lacquer is made from the sap of the rhus vernicifera tree. To harvest the sap, a couple of slashes are made in the tree for it to seep out. Once the sap is obtained, it is filtered several times through layers of special paper. The result is a translucent lacquer which color ranges from very light to a dark amber.

HOW IS URUSHI APPLIED

Layers of red urushi (or akane-urushi) are first applied by hand with a horse-hair brush to the hand-sanded wooden base, and then cured in a special cabinet that maintains a very specific and consistent heat and humidity.

Each layer of urushi that is applied must be cured in this cabinet for a minimum of 24hrs to fully harden. Only then can that layer be sanded before the application of a next layer. After the final layer is cured, the surface is polished and left to time where it will harden even more as it ages.

Tamenuri is an ancient Japanese urushi application technique dating back to the Jomon Period (14,000 to 300 B.C.), and slowly perfected over time from craftsman to craftsman.

On the box, Kuro-Tamenuri is used - a style where you have a solid opaque red urushi base which is then applied with additional layers of of dark translucent suki-urushi on top. This results in a uniquely deep patina which will naturally lighten over time, and slowly reveal the red base beneath as it matures.

Sunlight - specifically the UV light - will over time lighten the top suki-urushi layer and make it more translucent. Whether you prefer a redder or blacker patina to your box depends on where you display it, and how much natural light you expose it to.

"... in the still dimmer light of the candle stand, as I gazed at the trays and bowls standing in the shadows cast by that flickering point of flame, I discovered in the gloss of this lacquerware a depth and richness like that of a still, dark pond, a beauty I had not before seen. It had not been mere chance, I realized that our ancestors, having discovered lacquer, had conceived such a fondness for objects finished in it..."   ~ Jun’ichirō Tanizaki, 1933 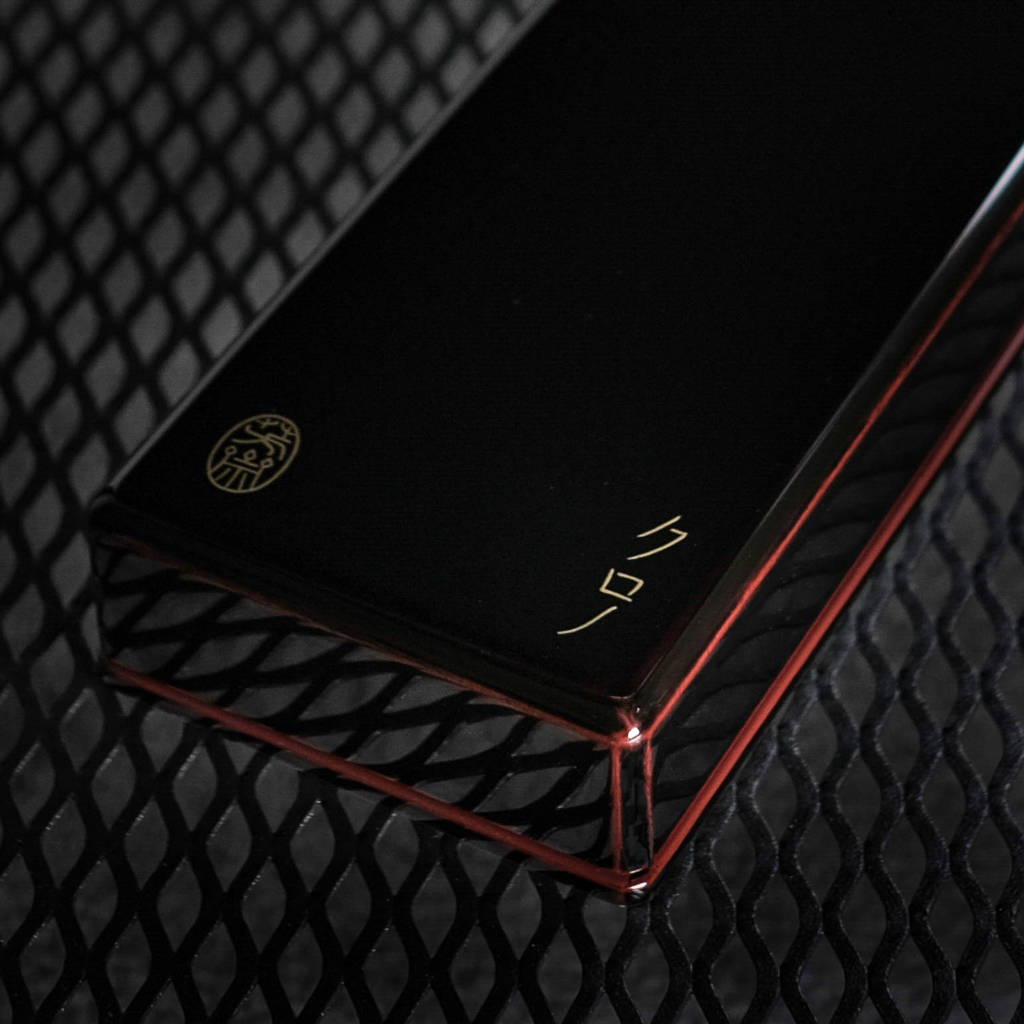 Many collectors and insiders have requested for a product like this to store or to display their Kurono Tokyo watch. But as with everything that we do, any product - even something as simple as a box - must have a significant element of artistry, and must bring to the table an inherent value that far surpasses its price.

A simple search will show that the price of this is a fraction of what is the norm for fine Japanese lacquerware, much less a tamenuri, and even more so a maki-e work of an actual 180 year-old artwork owned by Kurono. And if you do the math, this initiative cannot and will not generate any significant profit.

What it does generate - we hope - is the continued goodwill and faith collectors and fans have in the brand.

Urushi requires patience and determination to yield a beautiful piece of lacquerware. However, unlike mass-produced machine-made products - because the box is handmade, you will find minute imperfections especially as the urushi is hand applied. It will not be perfect although as much care and patience as possible is taken.

It also takes quite a bit of time to make each box, with an average of 4 months. The inherent and unique nature of urushi is that the longer it is left to cure, the harder and more beautiful it is. Then - on top of just the tamenuri urushi process - add on additional time needed to apply the maki-e design; add another layer of urushi; and finally cure and dry. The total process takes 6 months.
Cheaper, mass produced lacquerware have very short curing time of days, leaving the workshop the moment it is dry. This makes the urushi surface soft, immature, and dull. But curing it for too long will result in exorbitant prices running into the thousands as you typically see with fine Japanese lacquerware. We find that this curing time is the sweet spot that balances price without compromising on quality.

(*this product is for the single-watch box only, and does not include a watch)